As I said before, I like to learn a new programming language every year. I also like to read at least 6 computing-related books every year, but the article about those 6 will come later.

The reason for these two rules is twofold: first, it gives me lots of material to blog about, and helps me refine my list of preferred languages :) secondly, and more seriously, learning a new programming language makes you think differently about problems. It’s not just something to keep my CV updated; it’s to challenge what I know, how I know it, and why I know it. It is important, and it’s not easy; and I’m not the only one to do it.

From all the candidates that I had for this year, I chose to learn Erlang. Here’s some of my impressions. 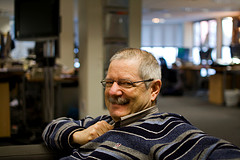 Erlang is a functional programming language, created by Joe Armstrong (photo) at Ericsson in the 80s. The name of the language is a pun between the name of the Danish mathematician Agner Krarup Erlang and the acronym “ERicsson’s LANGuage”. By the way, lots of things are coming from Denmark lately.

The main factor that made me jump on this wagon was that the language got a lot of attention, both in 2006 and 2007. The peak of all this buzz was a couple of days ago, when Amazon unveiled a new online service called SimpleDB, apparently built with Erlang. The reason for this is Erlang’s inherent capability to handle massively parallel programming relatively easily. In Erlang you can create lightweight processes, each sending messages to the others, and thus divide your problems in small units that run concurrently.

Even more buzz, the release of the Pragmatic Programmer’s book about Erlang (written by Joe Armstrong himself) has added a strong factor to the recent popularity of the language. 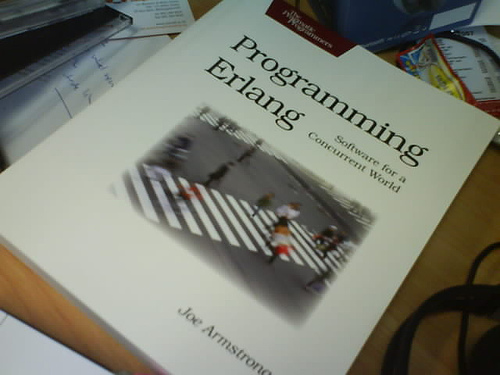 How to start with Erlang?

More interesting reading (and viewing) about the language:

My del.icio.us link list about Erlang will keep growing… subscribe to the RSS feed to get updated of new entries on your favorite reader.

In spite of some opinions that I have seen about Erlang so far (please check a question I’ve asked at LinkedIn about it), I have found this language extremely interesting; and at the moment, my list of known programming languages goes like this: